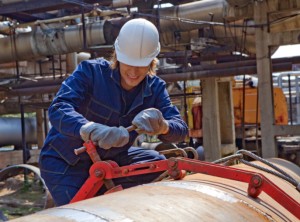 Plumbers, pipefitters, and steamfitters are among the occupations that have a bright job outlook, according to both federal and Texas projections. These jobs are forecast to increase by 21 percent nationally from 2012 to 2022, which is faster than the average for all jobs, according to the Bureau of Labor of Statistics. Locally, the Texas Gulf Coast region projects a 29 percent increase in occupations for pipefitters and steamfitters.

It should be noted that each of the occupations – plumbers, pipefitters, and steamfitters – are part of the same trade, which is construction. However, each occupation is specialized, even though they all share some similar tasks. Pipefitters, plumbers, and steamfitters assemble, install, change and repair pipelines or pipe systems that transport water, steam, air, or other types of liquids and gases.

The demand for these jobs can be attributed to several factors, including the flourishing petrochemical sector and a general lack of workers trained for those jobs.

Job Duties and the Workplace

Pipefitters usually work in the manufacturing and petrochemical industries, where they’re installing large pipe systems that carry petroleum or chemicals, for instance. Plumbers, on the other hand, typically work in the residential area and light industrial construction. Steamfitters install pipe systems that move liquids or gases under high pressure conditions. Many steamfitters have jobs at large college campuses, industrial plants, or power plants.

Many pipefitters participate in apprenticeships offered by employers who provide hands-on training. Formal training is also available at community colleges like the member schools of the Texas Gulf Coast Consortium of Community Colleges (TGCCCC), where students can receive top-notch instruction that takes into consideration industry requirements and industry best practices that will serve students well in their future jobs. The instruction in the classroom consists of teaching students the skills that they would learn in an apprenticeship program.

The TGCCCC member schools are in contact with companies in the petrochemical sector to stay updated about current practices, innovations and equipment that are being utilized in the field. Instructors then teach and share this valuable information with their students. Contact your local community college to learn more about degrees and certification programs that are being offered.