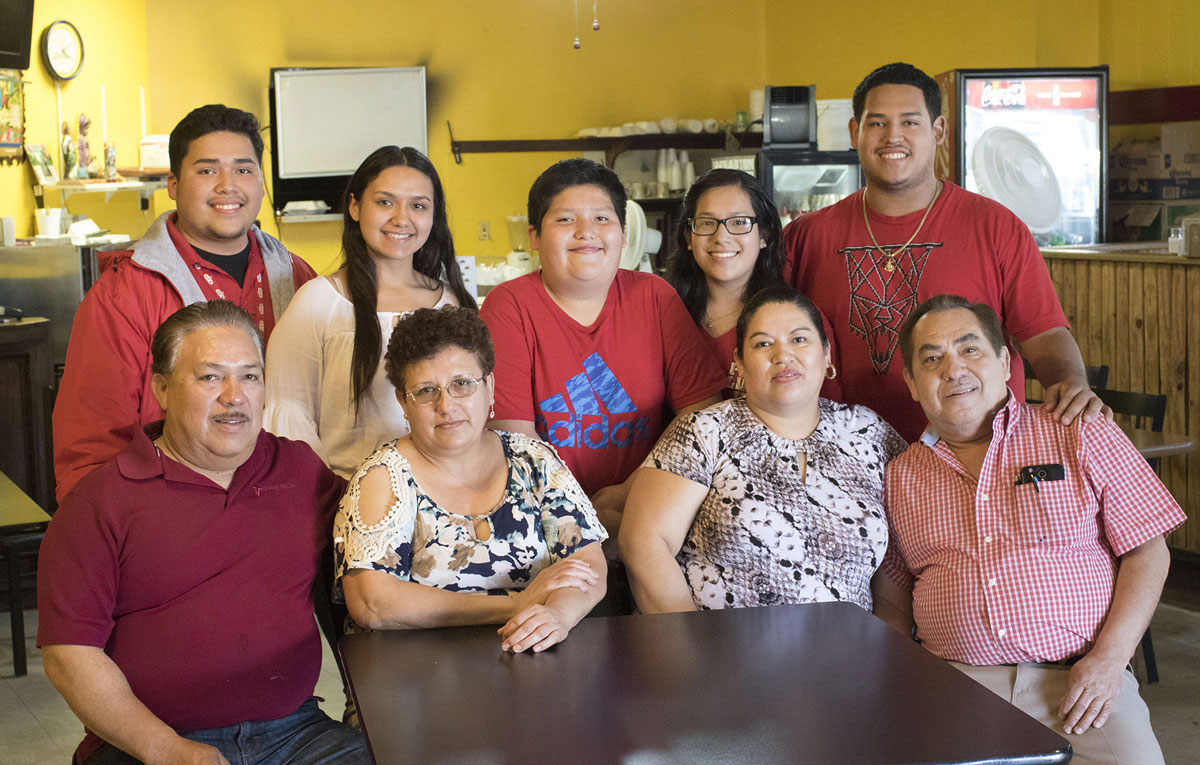 Four members of Wharton’s Cuevas family will graduate this year with both a high school diploma and an associate’s degree thanks to the ROAR program, which allows Wharton High School students to earn up to 60 credit hours at Wharton County Junior College. Pictured, front row, left to right, are Jorge Cuevas, Paula Cuevas, Maribel Cuevas and Angel Cuevas. Back row, left to right, are Angel Cuevas Jr., Nayelli Cuevas, Antonio Cuevas, Cecilia Cuevas and Everardo Cuevas.

WHARTON, TEXAS – From the moment she cradled her triplets in her arms, Maribel Cuevas has dreamed of providing her children with the educational opportunities she never had. From Mexico to Texas, Maribel has spent a good portion of her life juggling the duties of mother, wife and restaurant worker as she has met and overcome every obstacle that has stood in the way of her children’s success.

Her tireless efforts are about to be rewarded. Over the next few weeks, Maribel and her husband, Angel, will attend two graduation ceremonies, one at Wharton High School and the other at Wharton County Junior College. The couple’s 18-year-old triplets – Cecilia, Everardo and Angel Jr. – are walking at both events, receiving both a high school diploma and an associate’s degree within only days of each other.

Such a remarkable accomplishment was made possible by the Realizing Our Academic Reward (ROAR) Academy, a collaborative effort between Wharton Independent School District and Wharton County Junior College that for the past four years has allowed students like the Cuevas triplets to earn upwards of 60 college-level credits while still enrolled in high school.

Seeing her children graduate from high school with an associate’s degree already in hand is a dream come true for Maribel, who imagined so many wonderful things for her children when she brought them to the United States at the tender age of two.

“It has been a very long road but they have been able to do this through a lot of hard work,” Maribel said this week from the dining room of the Cuevas Mexican Restaurant, the Wharton café she and Angel have operated for the past 14 years. “Education is everything. It’s the key to life.”

The ROAR Academy began in the fall of 2014 as a way to provide students who would not otherwise be able to pursue higher education with a “jump start” on college. Although any Wharton High School student is eligible to apply, the program is geared toward those who represent the first generation in their family to attend college. The program is offered at no charge to the students or their families.

That the Cuevas triplets are among the handful that finished the program and earned a two-year degree is an extraordinary achievement. Of the inaugural class of 28 students, 21 have remained in the program while only seven completed enough credits to earn an associate’s degree. Those seven include the Cuevas triplets, their cousin, Nayelli Cuevas, and students Thomas Garza, Carlos Vargas and Christian Garcia.

Angel could not be prouder of his family’s accomplishments.

“Four out of the seven (ROAR students who will graduate with an associate’s degree) are from the Cuevas family and I am very happy about that,” he said. “I know they will continue to succeed in life.”

However, success has not come easily. Combining high school coursework with college classes is a daunting challenge. Add jobs and extracurricular activities to the mix and the end result is a formidable mountain that only the most dedicated can climb.

For the Cuevas siblings, the past four years have been an effort in extreme multitasking, with time split between the high school, the junior college, numerous school organizations, extracurricular activities, the family restaurant and Wharton’s H-E-B, where all three still hold jobs.

Nayelli, too, has worked at H-E-B the past few years and has split her time between the high school, WCJC, a host of school-related activities and the frequent late-night study groups held at the Cuevas house.

Despite such difficulties, all four students have managed to remain in the top percentile in their graduating class. The cost for such diligence, in some ways, has been significant. Typical high school socializing and extracurricular events were in many cases trimmed back or abandoned altogether.

“Most of the time we had to do our homework after work and so we had to help each other out. We had to study so much and were off-campus a lot and so we lost contact with some of our other friends,” Cecilia said. “Honestly, it has been challenging to keep up with our high school and college schoolwork and our GPA. This has been so time consuming, but on the plus side, I wouldn’t have really wanted it any other way. We are so grateful for getting this special opportunity.”

Everardo is thankful as well, though he was initially hesitant to join the ROAR academy due to the amount of effort required to see it through to the end.

“I was like, ‘I don’t want to do it,’ but since they (Angel Jr. and Cecilia) were doing it, I decided to join in,” Everardo said. “But eventually I got used to it and I’m now glad I did it.”

Angel Jr. was equally intimidated by the process.

“I didn’t see us getting this far, but now I feel proud of what we’ve done,” he said.

Nayelli, the triplet’s cousin, said she was excited about the program from the start, seeing it as a once-in-a-lifetime opportunity. Some of her friends let that opportunity pass them by.

“I had friends drop out of ROAR and they regret it now,” she said.

In addition to family support, the foursome also had several teachers at the high school and the junior college that went the extra mile to ensure the students stayed on track. ROAR advisors Alec Lawrence and Jonathan Gibson were particularly helpful.

“They really helped guide us along the way,” Cecilia said.

Gibson said his initial contact with the Cuevas students was to prepare them for their Texas Success Initiative Assessment (TSI) tests and for the rigors of college coursework. That turned out to be a relatively easy task.

“I didn’t have to teach them much,” Gibson said. “Once they started classes at WCJC I knew they wouldn’t have a problem being successful.”

WCJC Volleyball Coach Brianna Florus, who also serves as an Instructor of Kinesiology, had Angel, Cecilia and Everardo in her “Introduction to Physical Fitness and Wellness” class. She said it was a true pleasure to teach the three high school students.

“They were usually the first to arrive to class and the last to leave. Their focus and outstanding efforts have earned them their great success,” Florus said. “They are competitive with each other, yet always uplifting one another and demonstrating kindness to everyone. They are definitely deserving of this great accomplishment and will be a positive contribution to society.”

Gibson credits Angel and Maribel – along with Nayelli’s parents, Jorge and Paula – with instilling a sense of pride and achievement in their children.

“The Cuevas family has obviously had great leadership and guidance at home to help mold these students into the young adults they are today,” he said. “They prove to all of the other ROAR students that if you work hard and study hard, you can achieve what seems impossible.”

Jorge, who works as a pipefitter, believes success is a family thing.

“Whatever they need, we will support it,” he said. “If you have an education, you have a better chance of having a good life for you and your family.”

That’s advice the Cuevas kids have taken to heart. All four plan on continuing their educational pursuits. Cecilia, Angel Jr., Everardo and Nayelli will transfer to the University of Houston this fall, with three of the four planning on majoring in Biology and going on to pursue careers in the medical field and the other looking towards an engineering degree. All four plan on transferring to a Houston-area H-E-B to continue working while attending the university.

If their experience in the ROAR Academy is any indication, they should have no problems with future goals.

“We all want to be someone in life and we know that opportunities like these rarely come in life so we want to take advantage of that,” Cecilia noted. “Personally, faith and hope is what keeps me going. Knowing that this will not only help me but also my family gives me the extra motivation I need to accomplish everything.”

Maribel Cuevas understands such motivations. With her eldest three now on the verge of moving on to university-level studies, she is already set on steering her youngest child, 10-year-old Antonio, to the ROAR Academy once he comes of age.

A good education, after all, is something that is well worth personal cost.

“We have all had to make a lot of sacrifices for each other, but every minute of it has been worth it,” she said. “I am so thankful to the high school and to WCJC for providing this program and for saving us time and money. I truly hope the school continues to offer ROAR and that many more students take advantage of it.”