Kaitlin McClurg wasn’t sure about her career. She did know she wanted a profession in the medical career. The Bridger, Mont., native received an associate degree at a Wyoming college but wanted to further her education. 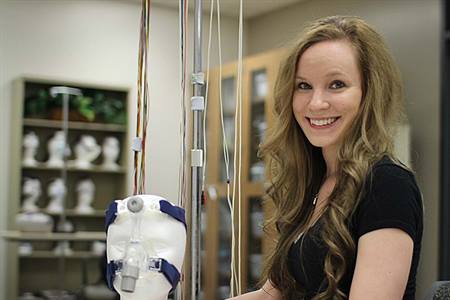 “I wanted to try something totally new,” she said.

Searching the Internet, McClurg found several options, but became fixated on a field called “polysomnography” – the study of sleep medicine.

“It’s something that not a lot of people know about,” she said.

McClurg found the best program was at Alvin Community College. She packed her bags and moved to Alvin to join the program. McClurg said ACC was her best option because it accepted the majority of her courses from her previous college. ACC also is preparing her well for the workforce. She is planning to graduate in May.

“It’s been a great program,” she said. “We definitely get a lot of hands-on training. They keep us very busy here. I’ve had much more experience than I felt I would ever get somewhere else.”

McClurg is one of many students drawn to the ACC polysomongraphy program because so few colleges in the United States offer it. Polysomnography is the study of sleep disorders. Graduates help with the treatment and diagnosis of the causes of conditions like narcolepsy, sleep apnea, and insomnia. ACC is the first college in Texas to offer a Polysomnography degree and is one of only 16 to offer it in the United States.

Polysomnography technicians are in huge demand in the workforce, said Georgette Goodwill, ACC program director. ACC graduates have a high job placement rate after receiving their degree, she said.

“All of the students in this graduating class of the Polysomnography Program will have jobs waiting for them upon passing their national registry exam,” said Goodwill.

McClurg is a great example of the many students who excel in the Polysomnography field, Goodwill said.

“Kaitlin has been an excellent student who shows great potential as a Sleep Technologist,” she said. “She has adapted well to the Texas heat and humidity – which is quite a change from the weather in Montana.”

While she is looking forward to graduating and using her education to help patients, McClurg plans to join the Neurodiagnostic Technologist program. Students with Polysomnography and Neurodiagnostic degrees are even more marketable when looking for a job.

“I want to get further ahead,” McClurg said.