A “Couple” of Success Stories from Galveston College

By TGCCCC
Posted April 24, 2015
In Uncategorized
A “Couple” of Success Stories from Galveston College2015-04-242015-04-24https://www.gulfcoastcc.org/wp-content/uploads/2018/07/logo_preview.pngTexas Gulf Coast Consortium of Community Collegeshttps://www.gulfcoastcc.org/wp-content/uploads/2018/07/logo_preview.png200px200px
0

Opposites attract, they say… Perla Oseguera was always college bound and Victor Alvarez could not see himself going to college. Yet, with the two most important women in his life encouraging his talents, Victor was soon to be convinced. 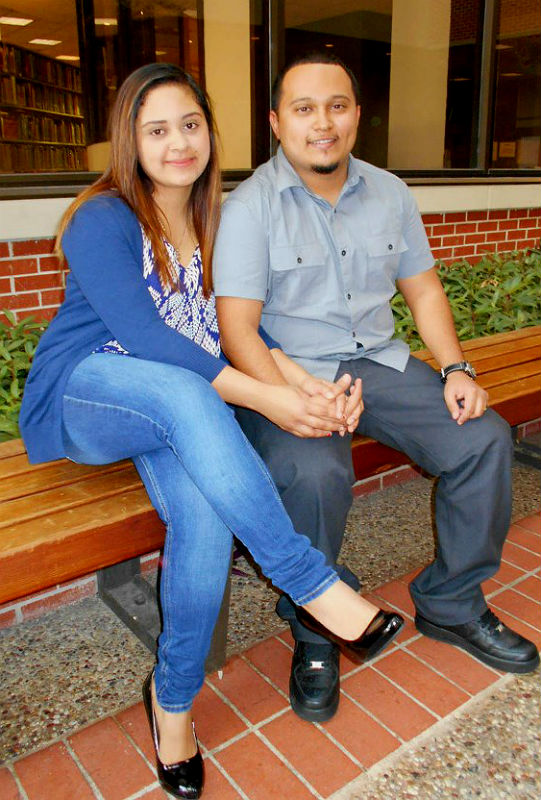 After graduating from Ball High in 2011, Victor, a valued member of the wait staff at Moody Gardens Hotel, Spa and Conference Center, wanted to ask his high school sweetheart to marry him. But, he knew that her ambitions involved a serious path in higher education with her sights set on becoming a registered nurse (RN) from Galveston College, and eventually, receiving at minimum a Bachelor of Science in Nursing at the University of Texas Medical Branch. Victor’s older sister persuaded him that he had the “right stuff” and should join her in college – and become the first two in their family to graduate with college degrees. Reluctant at first, Victor became more interested when Perla graduated from Ball in 2013.

In summer of the same year, they married. Perla was working for a local chiropractor and discovered that nursing was in fact the career for her. Her success at Galveston College came rapidly. She was eligible for Universal Access through the Galveston College Foundation and received two scholarships, the Marionette Beyah Memorial Fund and the Nielson Music Scholarship.

Victor chose the HVAC (Heating, Ventilation, and Air Conditioning) Certificate program with an Associate Degree. He was awarded a Pell Grant toward completion of his studies. Victor credits Rodrigo Santoyo, Instructor of Developmental Math at Galveston College, for getting him through his math courses and Mr. Ronald Foster, Program Director for HVAC, for his success with the advanced certificate program. His supervisors at Moody Gardens promoted him five months ago and he is now working as a technician in the Air Conditioning Department.

Both she and her young husband reflected on the significance of the College library for study. Because of full-time work commitments, Victor and Perla need the library environment to concentrate and work without interruption. Also, both of them meet friends in the Library and enjoy their time together.

For this young married couple, Perla and Victor, the future is bright because of their community college educations. Victor will graduate in May 2015 and Perla in Fall 2017.